"Singled Out"! London Wilde talks about the songwriting process and meaning behind "Beyond The Rain"

Singled Out: WildeStarr's Beyond The Rain

12-08-2017 .
WildeStarr released their brand new album "Beyond The Rain" today (Dec 8) and to celebrate we asked vocalist London Wilde to tell us the story behind the title track. Here is the story: 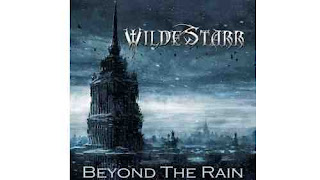 http://www.antimusic.com/news/17/December/07Singled_Out-_WildeStarrs_Beyond_The_Rain.shtml
Posted by Unknown at 12:23 PM No comments:

NEW Lyric Video, for "Beyond The Rain" title track!

When our PR guru Chip Ruggieri told us we needed a lyric video for our new single asap, Dave told me we should hire someone to make it. Not because he didn't think I would do a good job, but because he wanted to take some of the stress off of my already crazy schedule. I thought about it for about two seconds, and said, "NO", I think I got this!

I downloaded a lyric video template in after effects format, and spent 7 hellish days trying to make it work. It was technically cumbersome, took forever to render, and was actually rather boring anyway, as it was just the text mostly.
I was running out of time. I decided to do what I know best; Tell a story with images, and use special effects in Adobe Premiere instead. I scraped the first project, and started over. The video took me about 2 weeks to make, holed up in my office, eventually for 16 hour days. I missed my initial deadline by a week, but I think it was worth it!

The video imagery tells the story of child abuse, and how music became a fortress and a shield against external pain; How escaping to a world of imagination held the promise that one day the child will grow up, and no longer be under the control of the abuser. It's about discovering your own personal power through music.

I like to layer a lot of images together, and the video has a dreamy stylistic vibe. I especially like Dave's lead solo visuals. I grabbed him and said, "HEY, I need you to play that solo real quick, while I record you". Filming that part took about 15 minutes, including the 10 minutes it took Dave to remember how to play it!

I hope everyone enjoys the video, it's not perfect, but the music is great!

via WildeStarr http://www.wildestarr.com/
Posted by Unknown at 12:30 PM No comments: 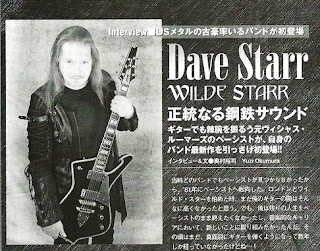 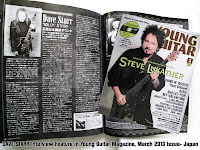 Dave Starr interview with Young Guitar, the biggest guitar magazine in Japan.  This is in the March 2013 issue. English translation.

Q.1 I would like to ask you about the history of WILDESTARR. It started when you met London Wilde in


1.- Hello, Dave, first let me say thanks for your disposition and for sharing part of your time with us in order to make this interview. From Chile’s webzine “Metal Spirit” 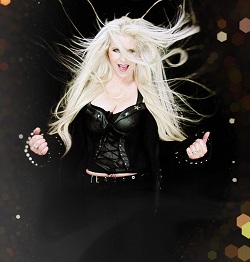 WildeStarr second release, “A Tell Tale Heart”, came out not so long ago, so we decided to ask the band’s founder and frontwoman, London Wilde, some questions. Being an extremely experienced musician, and having worked in pretty much all the fields related to music, we had the chance to ask her about pretty much anything which came to our mind; and her answers were very satisfying, it has to be said. So, here we present to you the interview with London Wilde, from WildeStarr! Enjoy!

Hi London, welcome to Femme Metal! We are very pleased to have you with us here. My first question is: you pretty much did everything regarding to music, you composed the soundtrack for an independent movie, you were a sound technician, and now you sing with WildeStarr. How do these aspects of music differ

The staff at KNAC.COM Pure Rock Radio have compiled their annual lists of Top Ten releases of the year. WildeStarr's new album "A Tell Tale Heart" is named at #1 new release of 2012 by Staff writer Michael Fisher. Also great to see our good friends from Brazil PASTORE on the list!


Here are his picks-

Posted by Unknown at 7:19 PM No comments: